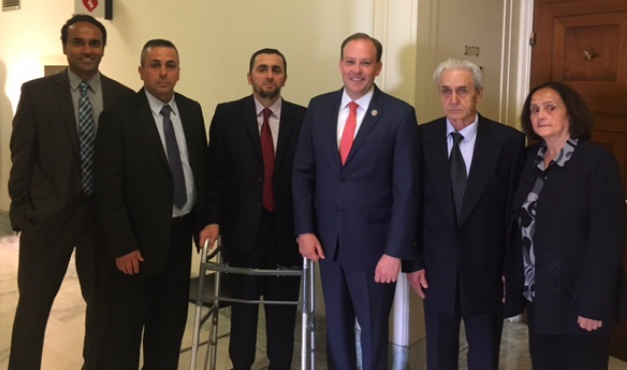 “Thank you, Mr. Chairman. I appreciate the Committee’s consideration of these bills today. Beginning with H.Con.Res. 20, this resolution has been introduced since 2013 regarding the execution-style murders of Ylli, 25 years old, Agron, 23 years old, and Mehmet, 21 years old, who were born in the United States, and resided in the greatest Congressional District in America in Hampton Bays, First Congressional District of New York. In July of 1999, these three brothers went overseas towards the end of the Kosovo war and were arrested by Serbian authorities for illegally entering the country when they accidentally crossed into Serbian-controlled territory. The brothers were kidnapped, murdered, and dumped into a mass grave in Serbia by government officials still serving today.

“Since taking office, I have been committed to helping the Bytyqi family receive the justice they have long deserved. They are here today in the audience in support of today’s resolution and to honor their family’s sacrifice. It is absolutely reprehensible that, despite many promises by Serbian officials to resolve the case of this state-sponsored murder, no individual has ever been found guilty of this horrible crime, nor of any other crimes associated with the deaths of these innocent Americans. It is the Serbian government’s responsibility to resolve this case, and my resolution notes that progress with this investigation should remain a significant factor which determines the further development of U.S.-Serbian relations. The Bytyqi brothers gave their lives to fight injustice; now we must return this favor and deliver justice for their family.

“I want to thank the Chair for his support in bringing this resolution, I’d like to thank the Ranking Member, Eliot Engel, for all of his advocacy through the years, and all my colleagues for supporting it.”

Rep. Zeldin’s entire speech can be viewed here, starting at the 45:50 mark.